Scrooge Is My Hero 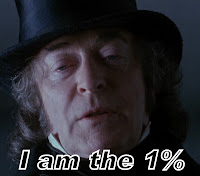 Some of my peers have called my atheism militant, while others accuse me of being a relativist. I will admit that it can be difficult to reconcile my disgust for religion with my love of culture; I constantly battle with Evans-Pritchard’s granary, as it were. While there are values in religious practice, the most obvious being enculturation, I must draw the line at extrinsic conflict. It is one thing to say that conflict within a given culture maybe inherent to the customs and practices of that culture, and it is another thing entirely to assert the same between two societies or cultures. Religion seems to be the medium for that clashing of swords.

Anyway, to completely switch gears: I do celebrate Christmas. Furthermore, I am more likely to say “Merry Christmas” than “Happy Holidays,” because that is how I was raised. Despite the utterance of mere habit, I do actually enjoy Christmas, or at least the nostalgia of it.


Having moved a couple dozen times, it’s no wonder that many of the traditions my parents attempted to start never actually became fruitful. We tried Twelve Days of Christmas, where we open a small present each night for twelve nights preceding Christmas. We tried opening a single present on Christmas Eve. We tried stringing together 25 rings of construction paper, and tearing one off for each day, starting on December 1st. The one thing that I know we did every Christmas, without exception, was listen to my father read the Christmas story from the Gospel of Luke.

And you know what? Even after admitting my loss of faith, even after realizing that the Christmas story is told four different ways by four different apostles, even after relinquishing any kind of trust I had in Bronze Age goat-herder myths, even after knowing that the holiday was appropriated from pagan religions, even after coming to the conclusion that Jesus was more than likely an ideology rather than an actual person…I don’t really mind it. This blows my undergraduate mind: How can a tradition be practiced with no useful function? What good does it do for me? Perhaps I should read more Geertz and Turner.

Regardless, there is but one Christmas story as far as I’m concerned: Charles Dickens’ A Christmas Carol. It seems that every so often, I realize more and more things that I love about the book. When I was a kid, it was the combination of darkness and Muppets. When I was a teenager, it was the allure of the mid-19th century industrial revolution. Later on, I might’ve said that I loved the story of a man changing his worldview to one of progress – and in one night, no less! This year, I realize that Dickens has typified an individual’s case of…can I call it “Boasian enlightenment?”

That is, once Scrooge has considered the breadth and depth of his situation (and that of the middle-, working-, and lower-classes) he understands why it is important for him, especially in his economic and social position, to have a change of heart. Scrooge, by the end of the novel, is a relativist. This was no mere rehabilitation, as I might have suggested a few years ago. Scrooge may have been backed into a corner by reason and evidence, but he could have done what the stubborn do: ignore it. No, Scrooge brought something else to the table that makes this much different: He was able to recognize and admit that he was wrong. (I will now state with great bias...) That is a virtue of science! (And now with less bias...) It is the key to change.

Understanding. It really is the core of what we, as anthropologists, hope to see in privileged peoples, isn’t it? As an undergraduate, the textbook example is anyone predating the 20th century and the way they describe “primitive” rituals as they are practiced by “savages,” or how certain physical anthropologists have attempted to prove an innate inferiority of non-whites. As a social networker, I read examples of this misunderstanding all the time, from Satoshi Kanazawa’s hurtful Why Are Black Women Rated Less Physically Attractive, blah, blah, blah  to Ed Rybicki’s shameful Womanspace to Gene Marks' senseless If I Were a Poor Black Kid. In A Christmas Carol, Dickens really has written a microcosmic account of the key to peace on earth and goodwill: contextual understanding. I wonder if Dickens had any influence on Franz Boas?
Posted by Unknown at 1:28 PM