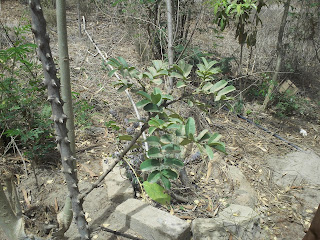 The Traditional Medicine Hospital at Keur Massar is more of a compound of specialized buildings, well groomed land, and a comprehensive garden of the world’s medicinal plants (and it’s growing). A sign out front lists some ailments they are capable of treating, probably the most common, which reads like a fast food menu. It also makes mention of the price structure: Consultations are 1000FCFA, and treatments are the same. I am told that in the event that a patient cannot afford either, they are more than welcome to make installments. The generous pay-what-you-can policy found at the guérisseur in Dakar might be missing here, but it’s understandable: Keur Massar is a self-sustained property where the plants are grown at the point of sale. One might think that the cheaper rates and wide-open rural space might be more attractive to those in need, but at this time of the year, the hospital may only see five to ten patients a day. Unfortunately, Keur Massar is about an hour and a half from downtown Dakar by autobus (or 3 hours, in my case), though the cost is only 400FCFA there and back. On the other hand, a trip to the guérisseur from my neighborhood could be 10 minutes at 2000FCFA by taxi or 45 minutes at 200FCFA by car-rapide – both prices being round-trip.


I found the Director, an animated man with an opinion on everything, to be lounging with others in the shade carrying on a conversation in Wolof. At first, he passed me along to a Quebecoise nurse-intern for a tour of the compound, and this is when I was introduced each of the specialized buildings and a brief overview of the hospital’s history. It wasn’t until later, when I had specific questions (e.g. Has traditional medicine enjoyed a growth in popularity since decentralization? [No.] Has there been a Senegalese president who backed traditional medicine? [LOL-NO!]), that the Director was more than happy to tell me everything I needed to know (and so much more). He even let me in on some privileged traditional healing knowledge.

I hadn’t initially gone to the hospital in search of information on Fagara xanthoxyloides, but I did mention in passing that I might like to see one if they had it. Right away, they wanted to tell me everything about it, and asked why (of all plants?!) I might inquire about this one. I explained that it fascinated me that one plant might be capable of so many things, but because most of the information I can find is biochemical in nature, I wanted to know more about the culture that surrounds it. They led me to their Fagara trees. This is an elegant desert plant with a thin trunk and fiercely hooked thorns protruding in all directions, which followed little or no pattern – some bunched together and some spread only slightly apart. Like many of the plants I’ve seen since I’ve been here, this tree seems to be warning any potential predation that it will not easily give up its scarcely found water and nutrients. Even the leaves are barbed on their undersides – something I’ve never seen the Etats-Unis. A man, tagging along on my private tour, presented some shears and proceeded to cut a small branch from about waist-height. He sheared off the thorns and leaves, and then handed me the freshest chewing stick I’d found yet.

The Director summed up the benefits of Fagara: “C’est l’aspirine des pauvres! (It’s the aspirin of the poor!)” At 200FCFA a bundle, he may be absolutely right, and this is a perspective that I hadn’t thought of. If it really is the “poor-man’s aspirin,” I would like to investigate how it might be framed in terms of treatment-seeking behavior. I have two weeks. On y va!
Posted by Unknown at 11:00 AM