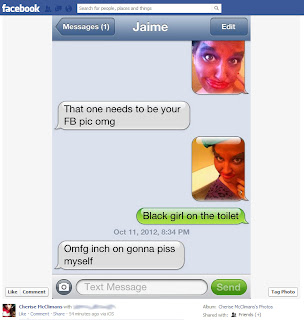 I was a little confused to see this photo on my feed. In fact, I didn’t know if it was real. I looked at it for a moment, just to make sure that it was actually what I thought it was – I didn’t want to overreact.

Nope, that is definitely a girl in blackface. I reacted, commenting sarcastically, “That’s not racist as fuck,” and promptly received a message from the offender, one Cherise McClimans. (See my chat with her after the jump.)


Note that, to her, blackface is not about black people per se, just “ghetto people.” Apparently when she said, “Black girl on the toilet,” what she meant to say was “Ghetto person on the toilet.” What I find rather peculiar is that she didn’t even take the easiest way out: “Fuck you, racism is funny.” I can’t argue with that, actually – not because it’s true, but because “funny” is ultimately subjective and if I have any hope of convincing someone that blackface is racist, I won’t get any traction there. If she wants to be a racist, there is nothing I can do about it. If she believes that her actions are not racist, there is hope because it means that she still has negative connotations with racism.

Also, I’d like to point out her secondary defense, after “blackface is funny,” is that her black friends didn't find it offensive. I was immediately reminded of what my Black Studies friends would refer to as “that slave mentality.” I have no authority – academic or experiential – to speak on that topic, so I’ll let someone else chime in if they want, but what I can say is more on the topic of “friends.” In my experience, it is rare that friends will actually voice their personal offense with you. You are friends for a reason; your actions are tolerated because the rest of your behavior is probably not all that different. They may be taken aback initially, but they’re not going to tell you, because “that’s just Cherise being Cherise.”

I’m not the most convincing or wittiest person in the heat of an argument, but I’m not sure that was what I was going for anyway. While I wanted to smash her down with fierce lamentation, I think I was more interested in getting her to think of her actions from the perspectives of others. Of course, as with most people, she was more interested in shutting me down, because what I have to say is dry and boring.

I don’t mean to pick on this single girl or infer that she is the next Hitler - after all, I am told that just last week there was an incident of young women in blackface at Washington University in St. Louis. These people are the typical mislead and ignorant Americans whose actions are symptomatic of an apathetic education system. Their aloof understanding of the historical and present realities of minorities reflects that of much of society. They, and people like them, are why anthropologists find it necessary to stay involved in the discourse of race. We have to reign in the myths, the misconceptions, and the insensitivities.

Last Spring, in collaboration with some trusted colleagues, and with the encouragement of a few professors, I planned to launch a local outreach program that would go into high school classrooms to talk about the concept of race. We brainstormed some lesson plans, some classroom activities, and the logistics of it all, and the best part was that this was a group endeavor that I could get behind – I certainly did not mind sharing the load. Unfortunately, before we could get anything off the ground and into the hands of a larger group of volunteers, my two project partners graduated and moved on to bigger and better things. This program will just be too big to run alone (or even direct), so until I find some equally driven self-starters that share my vision, it will have to take a back seat.

Related reads:
Race, Monogamy, and Other Lies They Told You: Busting Myths about Human Nature (Fuentes)
The Mismeasure of Man (Revised & Expanded) (Gould
Race: Are We So Different (Goodman, Moses, and Jones)
Posted by Unknown at 12:13 AM

Email ThisBlogThis!Share to TwitterShare to FacebookShare to Pinterest
Labels: anthropology, appropriation, blackface, facebook, privileged white girls, race, racism, you have to be kidding me