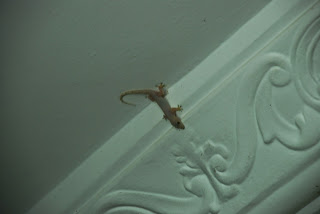 My host has been keeping me out all hours of the night. The other morning, about 3AM, we quietly walk in to the house, up the stairs, and down the hallway. I’m leading through the dark with the light of my cellphone, and flip the switch to turn on the light in the hall. I turn to my bedroom door and unlock it, but I notice that at the other end of the hallway, my host is frozen in his tracks. I whisper, “What’s up?” and he motions to the ceiling where I see a small gecko, perhaps 4 inches max.

Ah, cool! I think; I see lizards everywhere, but they’re always running and I can never get a picture. I duck into the bedroom for my camera, pop off a few shots, and then motion to my host, “I’m done, come on.” Then I realize, this big brawny former-goalkeeper of a man is petrified, and I don’t know why. The guy who laughed as I firmly gripped the back of his motorcycle through the streets of Dakar is now afraid to walk past this gecko. “Is it…dangerous?” I ask. “Yep,” he nods. “Does it…jump?” I ask, confused about how it could be a threat from the ceiling. “Yep,” he repeats. Okay, I need more information. “Is it poisonous? Is it lethal?” “No it’s not lethal,” but before he can finish his thought he dives into my bedroom for shelter. The gecko scurries across the ceiling, and startles my host. “Okay, what does it do?” I ask, snapping photos and getting a little too close to the gecko for my host’s comfort.


“It urinates on your skin, and you develop blisters in that place. If it urinates on your hands, they will swell. It’s…really not good.” “Would one have to go to the hospital?” “No, it’s just like a terrible rash. Trust me; you don’t want to mess with it.” He rifles through the dresser in my bedroom for some mosquito repellent, pulls the cap off, and from a safe distance he begins waving the bottle at the ceiling and wall like holy water. The gecko runs and eventually falls behind a chair in the hallway. My host dumps the rest of the bottle over the gecko. I figure that’s the end of it, given the toxicity of such chemicals. We both walk out onto the balcony for some air, but when we return, we find the gecko has come into the living room. We take a seat, and my host calls his cousin-slash-housemate to come join the mob.

When he arrives, he sneaks in slowly, sees the gecko, jumps backward and makes some whimpering sounds. At this point, I realize that the fear of this particular gecko is akin to the American fear of stinging insects – for those of us who aren’t allergic, it’s little or no danger, but that still doesn’t make it fun. The housemate grabs a broom, squats low behind the gecko holding the broom by the very end at arm’s length, grimaces, and attempts a first strike. Before he can bring the broom down all the way, he stops himself and dances away down the hall in fear. The host yells, “Come back and finish it!” He feels as if the gecko is holding us hostage. The housemate returns, assumes the same position, counts to three, strikes on four, and dances away on 4½.  The gecko takes two steps and collapses, its tail writhing in pieces. The housemate comes back with the broom to finish the job, but I protest – I’ve seen enough. He assumes the position for a third time, while I say, “Okay, okay, okay – he’s dead,” but before I know it he’s given it a final cathartic, THWACK. “And now…he’s very dead,” I say. I ask my host to explain again what the big deal is, while the housemate very cautiously sweeps the sad corpse into a dust pan, carefully holding the broom and the pan by the last half-inch, furthest from the body. My host explains, “If it pisses on your skin, you will develop terrible burning blisters.”

I have no reason not to believe him, but I want to know more. A Google search and a Facebook survey brings me to this page, where a friend in the States and I narrow it down to Moreau’s House Gecko, Haptidactylus mabouia.  I hear from some hobbyists that there are no geckos that are harmful to humans. A friend finds me independent confirmation from two of the world’s leading herpetologists – it is H. mabouia and it poses no threat. She adds that in some parts of West Africa, some have a fear that geckos and lizards will crawl into bodily orifices, even though they have never been known to do that. I remember learning from a professor – a Mayanist and epigrapher – that some reptiles in Belize were feared by locals despite their harmlessness, and furthermore regarded as intermediaries between the living and the dead. Now I feel like I should have done more to stop what happened, but I had no idea.

The next night, we find another – 2 inches max. Before my host can begin his pest control process, I stop him. “Wait, wait, wait. I found these geckos online, and it says they’re not harmful to humans. I sent my photos to two of the world’s leading herpetologists, and they agree. And besides, they eat flies, and spiders, and cockroaches! Let’s just let it be, huh?” I will never forget the look that he gave me which said, You have got to be kidding me. He chuckled, walked into my bedroom, and grabbed a new bottle of mosquito repellent.
Posted by Unknown at 1:01 PM